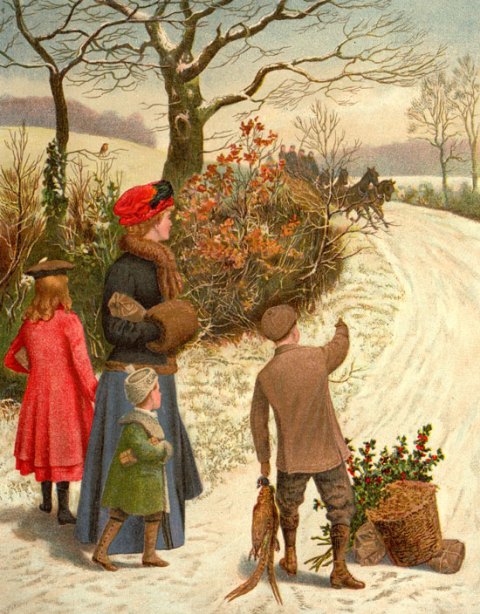 I found this image on karenswhimsy.com. She said it’s an illustration from an old children’s book, in the public domain, but doesn’t name the artist or book.

I woke up wanting to write about Joe Lieberman (let’s boycott Connecticut until they get rid of him), Christmas—should I send an e-card to all those I love, but haven’t contacted lately just because—when I decided to check out the paper, and got annoyed with Frank Rich’s choice of Tiger Woods to epitomize the falsity of the past year and decade.

My views of monogamy are well known to those who read this blog. Still, I wouldn’t want to be married to Tiger. Yet there’s an enormous difference between what he did and what the financiers and Bush administration did, and I refuse any facile connection.

Maybe it’s because my parents gave me a book of Greek myths when I was seven, a book whose size and pictures and even the look of the words I still remember. The stories of gods and mortals sunk deep into my imagination. There were also the Blue, Green, Red and Yellow Fairy Books and J.M. Barrie and C.S. Lewis to populate my inner world. I grew up rich with stories and characters, and the penchant for celebrity fetishizing never took hold. (Exception: The Beatles. But I was 9.)

Most everyone agrees that the crux of our current problems is people believing only what they want to believe, refusing all signs of danger if it means giving up pleasure, profit or comfort. The corollary to this is that, human-natural as this tendency is, it’s gotten worse.

Yes, no, maybe. We shouldn’t forget that the growth of systems of industry and finance follow their own evolutionary laws; that numbers matter; that much or our world is fueled by machines that can “think” much faster than we can. Our computers aren’t conscious or malevolent (yet), but they make individuals and more importantly, groups and segments of the population, able to do things bigger and faster than ever before. Think acceleration, exponential functions and speeding cars hitting patches of black ice.

This doesn’t explain Dick Cheney, but then nothing does.

Which brings me back to Christmas and the sound of snowplows outside. I want to walk in the new snow. I miss having a house I could throw a party in—miss the old days in Newcastle, N.H. when my mother would serve champagne with breakfast on Christmas morning while we opened the red velvet stockings decorated with handmade felt toys and the letters of our names, beautiful stockings with bells on the toes that she’d sewn for us years earlier. After the stockings and the blizzard of presents, we’d have eggnog made with whipped cream (more like zabaglione than anything else) and we’d all drink too much and spend the afternoon in bed.  I was young and in love and bed was a very sweet place to be.

I do regret that my mother so often was left to cook the dinner by herself. But some years she had a lover too. She was the age I am now and she had a house big enough to throw a wedding in, with the Atlantic ocean just outside, and three not-too-bad kids.

Nobody had a computer and Joe Lieberman hadn’t been elected yet.

You are currently reading Let it Snow at Mostly in the Afternoon.