Love Comes in at the Eye 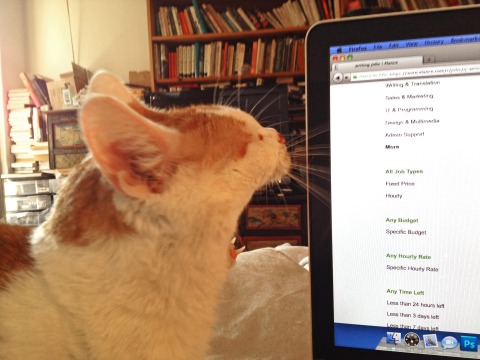 “I’m more attracted to women’s noses than their breasts,” Charles said as we walked down Lafayette in the warm summer evening.

“I’m attracted to their dresses,” I replied, looking at all the bright, patterned cloth and bare shoulders. We had nothing much to do, so wandered into Astor Place Wines & Spirits for a free tasting of German Rieslings. Nice cold wine, lots of info about where the vineyards were in relation to the Rhine River, which made me want to interrupt and whine that I didn’t win the wine-tasting Rhine River cruise sweepstakes I entered last year, ten days and plane fare, dinners.

We drank a thimbleful of a new ginger-flavored cognac, cut with sparkling wine. It tasted like a cross between craft ginger ale and the nectar of the gods. I stood there with those drops on my tongue and saw myself swallowing 6 or 8 ounces—the biting creamy sweetness sliding down my throat—then darkness—and waking up in another world (and I don’t mean the world of headache and vomit). The world where edges are always rounded, where people are naked like the nudes of great paintings, where poetry flows like water and water speaks in its own erudite tongue.

Astor Wine, in its new incarnation on Lafayette Street, is big and roomy. It’s the kind of place that makes you want to buy one of everything, not because you’re feeling alcoholically deprived, but because there are so many choices, with such pretty labels, and the years and vineyards and countries all compete for attention so politely.

The aisles are wide enough. The traffic isn’t bad for 6:30 in the evening. The jug wine cabinet is only steps from the locked “rare dessert wine” cabinet, where one can see a $599 half bottle of wine behind glass, and wonder if the old boyfriend’s credit card number has expired yet. The traffic was mostly couples. I glanced around, trying to see what connected them. I was too overwhelmed by memory, though, and only saw myself, myself, myself, in different eras and guises. If I were young now. . . if I had known then. . . .

Home to dinner: lamb chops, roasted onions and asparagus served on a fold-up table in the bedroom; iTunes routed through Apple TV (Chet Baker, who always sounds one or two stages of sad beyond where I’ve ever been); cats on the table, the bed, the floor, one each. Charles asks to be read something and I read him the previous five paragraphs of this entry, composed before dinner, and he laughs at the old boyfriend’s credit card number joke. Then he says, “The only way I can get a message to my girlfriend is through your blog. She’s too busy to answer my emails.”

“You can quote me on anything.”

“I like to remind my readers I’m not the only one who sinned against the bonds of matrimony,” I say, and he looks at me quizzically. Sinned? Bonds? That’s not the way we look at things.

Though I sometimes do. The pain of jealousy is brutal. But I never cut Charles off, never stopped being his friend, never let anyone else hurt him. That wouldn’t be enough for most people, but Charles and I are different from most people.

He’s playing his guitar in the street every day, making a little money. He doesn’t need to make much. I’m getting more work and we’ll be okay, pay off the debt, stay in NYC. When my nerves subside, when my nerves uncross their legs, when my nerves return or leave or sheathe themselves in fur, I’ll write my own stuff again. In August. Maybe sooner. Meantime, this is it, my bulletins from the land of needy cats, thawing hearts (I’m at the stage where, if I were a pound of ground beef, you could bend and slowly break apart the mass), and creative aging. On the Internet nobody knows you’re a dog. I have my own version of that, but this is the Internet so it shall remain behind the veil.

As if I haven’t told you all everything already.

A noun sentence, no verb
to it or in it: to the sea the scent of the bed
after making love … a salty perfume
or a sour one. A noun sentence: my wounded joy
like the sunset at your strange windows.
My flower green like the phoenix. My heart exceeding
my need, hesitant between two doors:
entry a joke, and exit
a labyrinth. Where is my shadow—my guide amid
the crowdedness on the road to judgment day? And I
as an ancient stone of two dark colors in the city wall,
chestnut and black, a protruding insensitivity
toward my visitors and the interpretation of shadows. Wishing
for the present tense a foothold for walking behind me
or ahead of me, barefoot. Where
is my second road to the staircase of expanse? Where
is futility? Where is the road to the road?
And where are we, the marching on the footpath of the present
tense, where are we? Our talk a predicate
and a subject before the sea, and the elusive foam
of speech the dots on the letters,
wishing for the present tense a foothold
on the pavement …

You are currently reading Love Comes in at the Eye at Mostly in the Afternoon.