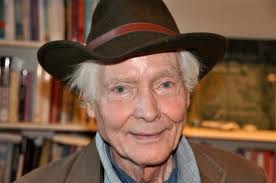 We went to hear W. S. Merwin talk and read last night. I thought it was last year I heard him at the Library, but it was 2 ½ years ago. It’s been a seismic 2 ½ years, yet still memory reshuffles things.

Merwin’s voice was a little weaker, with more of that static you hear in the voices of the elderly, as if they’re on the far edge of the transmission band. He talked about poetry and language both evolving as an attempt to express the inexpressible. I’m not sure I believe that about language, or even poetry. The fact that we can never say exactly what we mean is always the subtext of what we say, but is it what matters most? “In wildness is the preservation of the world,” Merwin quoted, defining “wildness” as everything that gets away from us, that essential reality we can never hold onto, that art evokes for those with a mind to listen. This is his most persistent theme: his poems are full of what is there and not there at once, his faintly melancholy, meditative tone like fingers endlessly sliding the same silky stone from thumb to pinkie, registering that coolness, smoothness, darkness, mystery.

In J. D. McClatchy’s introduction he talked about Merwin as a visionary poet—the thesis of the term paper I wrote on him 40 years ago, in Russell Banks’ Contemporary Poetry class. I wondered where that girl went, who was so madly in love with poetry, who would have gone to a dozen events in the last month, if she’d been here, if I were still her.

Fitzroy woke me this morning, wedging his purring face under my nose, then noisily chewing on my hair until Charles lured him out of the room, and I went back to sleep. I dreamed that I woke up and was depressed. Instead of trying to write, I went for a walk in a neighborhood that was new to me. I felt exhilarated and so happy to be in New York. I remember pale pink cobblestones and a dusting of snow. Then a woman spoke to me, referring to a climate event in a distant country, and I tried to say something about how extreme weather is moving like one big storm across the earth, but the gestures I used to illustrate my point—hands up and churning the air—were alarming, and I realized that what she saw was a stereotypical New York crazy lady. I felt sad that I could no longer communicate appropriately.

Merwin recited a half dozen poems. Three of them were elegies for dogs. Here’s one.

You are currently reading By Dark at Mostly in the Afternoon.