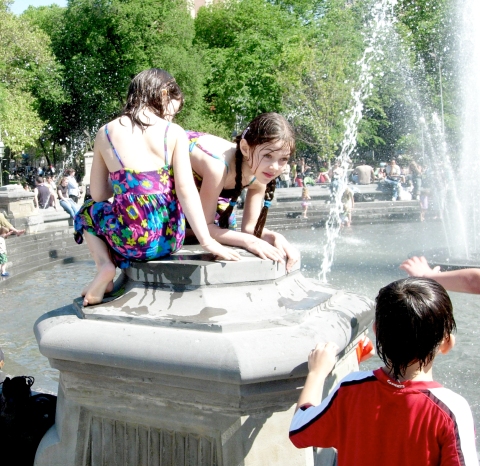 We went out to look at the Harvest Moon, but it looked like any other full moon. No round-bellied, pumpkin-colored menacingly gracious goddess for Manhattan—no, a distant, silvery sphere, eager to stay far away from the embarrassment of Earth.

Later, we watched a program on marine life: a large peculiar fish with a squiggly nose swimming in a cloudy hum of blue, then just as we relaxed into that, a sea turtle caught in a fishing net, fighting, winding itself into an ever more impossible knots. I wanted humanity to go extinct then. We’re going to lose millions of species as it is, but if humans survive, they’ll keep despoiling, maybe more carefully, but always taking far more than their fair share of resources.

I would prefer it if a couple of million of us could thrive gently on the earth, spread out, using renewable energy and clean tech to live comfortable, exploratory lives. But if I could chose only survival or not, without conditions, I would end us. And I’d even do it right now, not say, “Let it happen after I’m dead, after the children are dead,” etc. But of course I can’t make that choice, so it doesn’t matter. Instead I try to get back in a fiction-writing mode, vividly aware that my girlish dreams of “immortality” for my work are not only limited by my talent, but more severely limited by what I can imagine future people would want to read from this generation, the generation they will hate the most.

They’ll forgive Homer, Shakespeare and Keats, Jane Austin, Scott Fitzgerald, Balzac, Proust. I don’t know if they’ll forgive anyone who was adult after 1960. Certainly not us. How could they, reading our newspapers, watching our TV—the stultifying stupidity and greed, the utter lack of concern for nature, animals, our descendants….

I think of how hard it is and has been to forgive those whom I blame for blighting some part of my life—and that’s nothing, tiny emotional pain—nothing compared to what we’re doing to the world and future.

They will hate us and envy the world we had, which we complained of. Oh, those terrible, tiny airplane seats, the lines at Security, the taxi lines. Obesity in America! High gas prices! They’ll want to come back and slit our throats; you know they will. The Midwest and West will be like Australia in a bad year; the coasts and river valleys will flood all the time. FEMA will be stretched very, very thin, so thin it will be invisible. There won’t be enough firefighters and the wildfires will take the trees and houses and animals and people and it will be tragic but in other places they’ll wait out the hurricane and wonder: which is worse, fire or rain?

I find it almost more painful to imagine those people and how they will think of us than the actual damage and how soon it will happen. We have no experience of this. We hate the past if it’s hurt us directly—if our parents were in the death camps, or our great-grandparents were slaves—but mostly it’s a tableau of wonder, disgust, drama, oddity: our storybook. Our origins. What we are better than (smarter than), or what we long for wistfully—the pastoral joys of 17th century England, the glory that was Rome, America before the white man came, the dinosaurs!

We don’t look back and say, you bastards. You greedy, evil pieces of shit. How dare you. How dare you. Come back to life so I can kill you, you Richie Rich trust-fund babies, you overprivileged, clueless twits living in your bubble…just look at you on that endless video and film you left behind, how you whine and pontificate, proclaim each other the enemy of workingman, the middle class, the lovers of freedom, the real Americans. Socialist Muslim. Heartless Capitalist. You’re all the same, you’re monsters…you have no clue what life is like for the rest of us…

I’ve heard people say, now and then, that they fear what their grandchildren will think about them. But as a novelist I can’t help but go along with the climate scientists, shouting into the wind: It will be so much worse than you imagine.

The obvious is difficult
To prove. Many prefer
The hidden. I did, too.
I listened to the trees.

They had a secret
Which they were about to
Make known to me–
And then didn’t.

Summer came. Each tree
On my street had its own
Scheherazade. My nights
Were a part of their wild

There was someone with eyes closed
On the upper floors.
The fear of it, and the wonder,
Kept me sleepless.

The truth is bald and cold,
Said the woman
Who always wore white.
She didn’t leave her room.

The sun pointed to one or two
Things that had survived
The long night intact.
The simplest things,

Difficult in their obviousness.
They made no noise.
It was the kind of day
People described as “perfect.”

Gods disguising themselves
As black hairpins, a hand-mirror,
A comb with a tooth missing?
No! That wasn’t it.

Just things as they are,
Unblinking, lying mute
In that bright light–
And the trees waiting for the night.

You are currently reading Old Devil Moon at Mostly in the Afternoon.