It’s richly autumn now, and the air is like wine. I know this is not a new simile. It’s one I used to be puzzled by. I didn’t think air was at all like wine—air was too free and fast and invisible. But as one gets older the light thickens. It slows down. The deepness in the afternoon sun, in October, is indeed like a goblet of wine: a Sancerre or a Chablis. A hint of overripe fruit rides the wind, even in New York City. Okay, I’m at the farmer’s market in Union Square. There are lots of bins of apples as well as Concord grapes. In the middle of Sixth Avenue, there wouldn’t be fruit on the air, although there would still be that honeyed light like the conversation of a 40-year-old courtesan played by Catherine Deneuve.

Actually I’m not at the Farmer’s Market anymore, and it’s quite dark outside. I’m remembering and I can feel the brain ants patiently taking apart the memories of the day, sorting them into piles with older memories, so that Keats’ Ode to Autumn, and all the autumn walks of my New Hampshire adolescence and Van Gogh paintings are getting mixed up with the apples and light and cars and the books I dropped off in the chute at Whole Foods, to be distributed to subway riders. I’ve given them my entire collection of post-Jungian psychology, those intricate, myth-inspired ramblings that meant so much to me at 35, and now seem entirely beside the point. Although, of course, now that they’re gone, I wonder. But I did keep Marie-Louise Von Franz’s On Dreams and Death, in case I need a booster.

I have an apple I could eat now, while listening to my little black cat sing for love—head tilted up, chin whiskers glistening, white teeth showing in the seam of her smile—while waiting for the orange cat to come knock her off the sofa top for presuming. I want it to be a perfect apple. I want it to taste like those apples that make you think Eve made a good deal. I’ve had apples like that, but I suspect the one I bought is not that good.

The brain ants come trundling in with the little memory bit that holds the apple cider doughnuts we ate at the farm stand the final weekend we were moving out of our house in the country. I’d been on a no-sugar diet for weeks, but after several days of hard physical labor I saw those doughnuts, fresh out of the boiling fat, and I bought three for a dollar and ate 2 and told Charles he was lucky to get any. Then we had to hang around until the next batch came out. I don’t remember if the air was like wine that day. I think it was probably like Heaven. 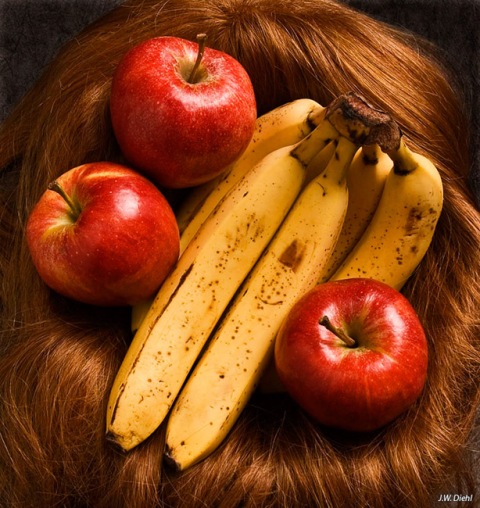 1
There is a gold light in certain old paintings
That represents a diffusion of sunlight.
It is like happiness, when we are happy.
It comes from everywhere and from nowhere at once, this light,
And the poor soldiers sprawled at the foot of the cross
Share in its charity equally with the cross.
2
Orpheus hesitated beside the black river.
With so much to look forward to he looked back.
We think he sang then, but the song is lost.
At least he had seen once more the beloved back.
I say the song went this way: O prolong
Now the sorrow if that is all there is to prolong.
3
The world is very dusty, uncle. Let us work.
One day the sickness shall pass from the earth for good.
The orchard will bloom; someone will play the guitar.
Our work will be seen as strong and clean and good.
And all that we suffered through having existed
Shall be forgotten as though it had never existed.

§ 3 Responses to Apples and Wine

You are currently reading Apples and Wine at Mostly in the Afternoon.