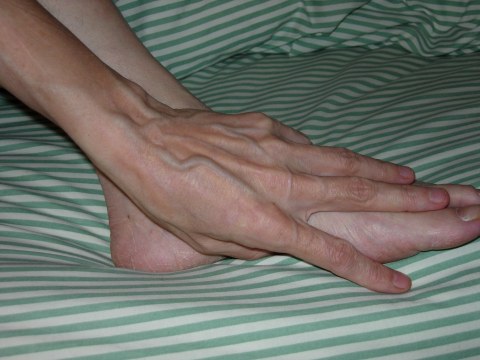 We went to the Met today, early enough that the lines weren’t long, and wandered through Chinese decorative arts, American landscape painting, the Greek and Roman rooms, and the African rooms. I told Charles about Delilah’s friend Zach Hyman who’s been shooting nude women in various places in the city. He was doing it at the Met a week and a half ago, and the model, K.C. Neill, got arrested for public lewdness. That’s a little better than arresting a painting for lewdness, but not much.

It reminded me of the time Charles got busted by a Met guard for sketching. He wasn’t sketching, merely taking notes, and argued this, which the guard disputed, and when the guard grabbed him to take to the interrogation chambers, Charles resisted and ended up falling down the long staircase. They let him go after questioning, mostly because he showed them his MoMa ID, but I had to wait around, wondering if I’d need bail money. “We should have sued,” I said today. That’s a wicked staircase.

But it’s hard to stay mad at the Met. There’s so much beauty and it makes me happy. I like going on impulse, when there’s nothing I’m dying to see. I notice the building more. I’m aware of it as a palace I’m privileged to enter rather than as an endless, feet-punishing maze. Like everybody, I want to live in it.

Today, although I started out most interested in the cinnabar plates and boxes in the Chinese Decorative Arts exhibit—because I have cinnabar beads I use in jewelry-making*—it was John Coplans’ nude photographs of himself that I most loved. No beautiful young woman has anything on him  as a model. His creased, aging belly with its scattering of hair looked like a Japanese watercolor, a winter landscape with thin, bare-branched trees.

After the museum we went for tea and pastries at Sant Ambroeus, on Madison Avenue and 78th. It was a perfect day, just slightly cool, the weather New York was made for, and I was having sweet and melancholy memories of the neighborhood. This was my first home in New York, when I was eleven, and my part-time home  for a couple of years before Philip moved back to Brooklyn. Today all the usual reasons for disliking the Upper East Side dropped away and I was intoxicated by art, cake, brownstones and Central Park. Of course, most of the residents were away for the long weekend. That provided exquisite psychic ventilation. The skins of the buildings were shimmering with relief.

* Take a look at my jewelry

You are currently reading Eyes like Ripening Fruit at Mostly in the Afternoon.