The Penis and the Beehive Grenade 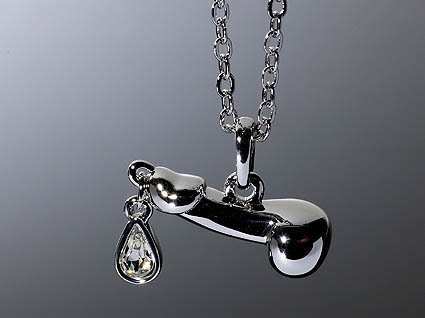 One of the most often used search terms that end up directing traffic to my blog is “penis jewelry.” I don’t believe I have referred to this category of wealth, although “penis” and “jewelry” are both items of interest to me. I’d like to remedy that.

According to The Encyclopedia of Body Adornment by Margo DeMello, the most common forms of penis jewelry are Ampallang, Prince Albert piercing, and Apadravya. Those two funny “A” words you can look up for yourself. Wikipedia will tell you all about it. (According to New Scientist, my weekly science read, Wikipedia is on the wane—everybody’s moved on to Twitter—and as a result, will become less and less reliable. Remember this in the future.)

The alternative to piercing, especially if you happen to be female, is found in the photograph above. I don’t want one but maybe somebody does. It’s kind of pretty.

***
I subscribe to a weekly email newsletter that keeps me informed of new discoveries in medicine. I usually don’t read it, but when I do, there’s always something interesting. This week: a study in the UK, to determine whether the calming effects of a cuppa were due to its chemical makeup (since tea contains caffeine, not valium) has shown that having a cup of tea reduces stress because of the ritual of putting the kettle on. However the effect also held for those for whom the tea was made and served by another person: soothing in a different way.

I can attest that having a cup of tea made for me is very welcome, whereas having a cup of coffee isn’t; I assume you’ll fuck it up. I like brewing my own coffee. I’d think the British would feel that way about tea, but it all depends. When you’re in a research lab, you take your comfort where you find it. Further studies are needed to discover the psychological effects of refreshing one’s lipstick, cutting into a newly baked loaf of bread, and letting the cat out in the morning.

My friend Rachel calls New Age books “Metaphysical Porn,” a label that made me think there was a whole new genre out there for me to wallow in. Those books stress the meditative, Buddhist value of the ordinary moments of life, a sentiment found in many cultures at many times, and one that French priests of the 19th century excelled at when counseling noble ladies. They basically advised these yearning, intellectually-deprived women to focus on getting through the day with patience and good humor, regarding every boring duty as holy. It’s something humans can be good at. I used to be good at it. I consider trying it again, from time to time, but I lack a crucial enzyme.  I forget which one.

In other science news, researchers have harnessed bee venom to fight cancer—building “nanobees” to deliver the venom to tumors, killing cancer cells while keeping other cells safe. This nicely complements something I’m writing—a review of a book about insects used in warfare—beehives thrown at the enemy are one of the oldest kinds of grenade. Castles in Wales and Scotland have recesses in the walls where the bees were encouraged to build hives, the better to be ransacked in the course of a siege. It’s estimated that this weapon was first employed in Paleolithic times, and continued to be used through the Middle Ages. Even more nefarious was the use, in war, of poison honey—honey from bees who fed mainly on rhododendron blossoms.  Locals knew to be wary; outsiders didn’t. That’s another story. Takes place in Colchis, home of that famous poisoner, Medea. http://www.medicalnewstoday.com/articles/160282.php

You might also want to know that asparagus leaves seem to protect against liver disease from alcohol, and from hangover symptoms. That’s leaves, not the vegetable you eat for dinner, though perhaps the vegetable helps. According to the online salesmen, it also cures everything else that might trouble you, from urinary tract infections to cancer.
http://www.medicalnewstoday.com/articles/160722.php

The River of Bees

Soon it will be fifteen years

I return to his voice rising like a forkful of hay

We are the echo of the future

You are currently reading The Penis and the Beehive Grenade at Mostly in the Afternoon.