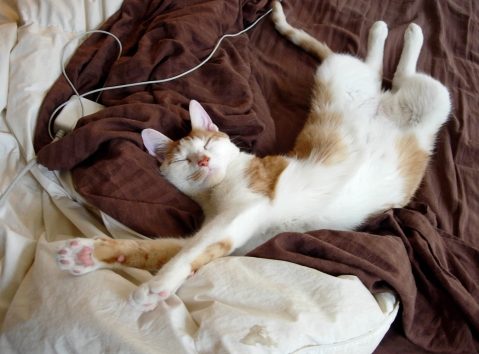 I’m taking my cat to the doctor later. He’s been sneezing and feeling poorly (picture above deceptive). His pretty pink nose is a little swollen and he’s rubbing snot all over me and everything else, I suppose because he’s itching.

I met his first owner, Julia, the other day. She’s a very charming, friendly NYU student. She gave me his adoption papers. He was found starving in Williamsburg with his sister, Dahlia. The shelter strongly recommended in his bio that he be adopted with his sister, because “he is very playful and will be bored alone.” Yup. I guess Dahlia is long gone.

His origins explain why he startles so easily and why he yearns for the outside—source of danger, fear and excitement, as it is for me too. Of course, he could be like that even if he had a safe kittenhood, but it satisfies me to know his story. I’m sorry he lost his sister. It’s a good thing when siblings team up against the cruel world.

For some reason, my mind keeps inserting the adjective ‘black’ in front of her name. The Black Dahlia was the sobriquet given to famous murder victim Elizabeth Short by reporters. (Novel by James Ellroy, film by Brian de Palma. Neither read or viewed recently.)

Elizabeth Short was found on January 15, 1947, in a vacant lot in Leimert Park, Los Angeles, severely mutilated, cut in half, and drained of blood. Her face was slashed from the corners of her mouth toward her ears, and she was posed with her hands over her head and her elbows bent at right angles.

Elizabeth Short was born in Hyde Park, Massachusetts and her father built miniature golf courses until the 1929 stock market crash. In 1930, he parked his car on a bridge and vanished,[1] leading some to believe he had committed suicide. Later, it was discovered he was alive. Elizabeth Short was raised in Medford, by her mother. Troubled by asthma and bronchitis, Elizabeth was sent to Florida at 16 for the winter, and spent the next three years living there during the cold months and in Medford the rest of the year, while working as a waitress. She was 5’5″ and 115 pounds, with bad teeth, light blue eyes and brown hair. At the age of 19, she went to Vallejo, California, to live with her father, who was working at Mare Island Naval Shipyard. The two moved to Los Angeles in early 1943, but after an argument, she left and got a job at one of the post exchanges at Camp Cooke (now Vandenberg Air Force Base), near Lompoc. She then moved to Santa Barbara, where she was arrested on September 23, 1943 for underage drinking and was sent back to Medford by juvenile authorities.

Elizabeth Short returned to Southern California in July 1946 to see an old boyfriend she met in Florida during the war. For the six months prior to her death, she remained in Southern California, mainly in the Los Angeles area. During this time, she lived in several hotels, apartment buildings, rooming houses, and private homes, never staying anywhere for more than a few weeks.

~Condensed from wikipedia article. Their links.

Perhaps I’ve been reading too many mystery novels. His sister is most likely The Apricot Danish, adopted by a strange, solitary novelist in his mid 40’s, determined to write the first bestselling paranormal romance in which the heroine changes, not into a lioness or a leopard, but an orange tabby cat with miraculous demon-killing powers.

The paranormal romance field is booming these days. If only I’d thought to write one 10 years ago. I’d be a natural. But now there are women falling in love with shapeshifters left and right (werewolves, weretigers, werehorses. The wererats are so far only supporting characters.) It makes you wonder how much bestiality really takes place in this country.

I do have a shapeshifter in my fantasy novel, but she’s dead. She doesn’t even come back as a vengeful ghost or a charismatic zombie. She’s merely a beautiful memory.

One thing I’d like to teach the cat is not to step on my breasts. I work in bed because it’s the most comfortable for my arms, and he sleeps near me. When he gets lonely, he walks up to my face for a cheek-rub without regard to terrain. When I yelp he runs and hides in the closet so I try not to, but it hurts. Especially when he steps directly on the nipple. That made me scream. An armored bra would be appreciated, if any of you have one lying around.

I like it when he walks up between my breasts and gently bites my chin. That’s just so romantic, so ruggedly masculine, so…feline. Nevertheless, I’d like to get him a sister-wife (everyone says he looks Egypytian), and let our honeymoon be over, but this trip to the vet today reminds me why I should think twice. Charles has offered to pay for it, in exchange for the 3 or 4 new pictures of the cat I send him every day, but cats live long and my sister the vet—who likes nothing better than working for free for relatives, friends of relatives and perfect strangers with the same first name as one of her relatives—lives out of town.

Later  Back from the vet, the one Julia used. I wasn’t thrilled with the guy, though he seemed to know his stuff. He kept asking questions that I had already answered in my initial conversation, when he wasn’t listening. He gave me antibiotics for the cat’s cold, telling me that cat colds were bacterial, not viral. What I understand (and perhaps I’m wrong) is they start out as viral, and then sometimes bacteria move in when the immune system is compromised. I wish I knew a way to talk to doctors that would indicate I have enough brains and background to understand simple or even moderately difficult medical concepts without making them feel they’re being clobbered by an Internet-crazed knowitall. I can talk to my sister, and I can talk to Whitney and Laura, who are people docs, but it would be nice to be able to talk to the attending physician.

Fitzroy freaked when I put him in the cat carrier, but was good at the doctor’s. He sat quietly on the metal table, looking scared, only trying to jump off every few minutes. He hissed at the technician once, but for good reason. Now he’s home and seems relaxed, sitting on the living room floor licking his butt where the thermometer went in.

Which reminds me of a story about someone my brother knows, who fed her cat cloves of garlic for days to cure worms. “The cat had worms literally hanging out its butt,” he said. I first remembered this as the woman stuffing the garlic up the cat’s anus, and only when I started trying to picture how the garlic got through the commuter-crowd of worms (and felt a pang of disbelief that this woman, whom I also know, would be so…hands-on), did I realize my mistake. The stillbirth of a tall tale.

You are currently reading Sneezle Cat at Mostly in the Afternoon.