“If you’re going to spend the next year of your life writing, you would probably rather write Moby Dick than a little household mystery with cat detectives. I consider tragedy the highest form of art.”—Joyce Carol Oates, in The New York Times Book Review, April 12, 2009 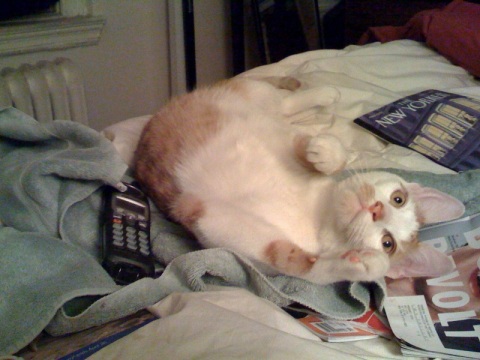 a good detective consults many sources of information

This is the sort of remark that raises hackles, like Hilary Clinton and the famous, “I guess I could have stayed home and baked cookies” line. Having just acquired a cat, and not being of a mind to write Moby Dick, though I do like a good pirate story, I took exception.

a) Joyce Carol Oates has never written Moby Dick. As far as I know, nobody has but a guy named Melville.

b) If you wrote a truly convincing cat detective novel, it would be a literary triumph of the highest order. My cat, for example, would make a terrible detective. He’s basically clueless about the world and if a murder took place in my living room while I was busy writing this blog, and it was in my best interest, and therefore his, to find another suspect than myself, I doubt he would draw my attention to a salient detail overlooked by the police. Possibly if the killer got out the window and took the screen with him, the cat would take the opportunity of getting on the ledge again, in which case I would scream, he would fall—12 stories—and probably not survive for the next volume in the series.

Or else, given that cats have 9 lives, etc, he’d come back to me missing several body parts, one eye hanging from a thread, his liver in his chest cavity, his heart pumping out his ear—and the series would devolve into the gross-out supernatural, which I don’t think is what Oates meant, though she’d probably like that better than whatever cat detective she has in mind. It could even be tragic: a cat who is neither alive nor dead solving mysteries out of existential despair.

For all her devotion to the art of tragedy, Oates is not inclined to let it have its place in the normal course of things. In the same interview, she said, referring both to the fact that she does her own cleaning and to the recent death of her husband, which has inspired an interest in writing a memoir about widowhood that would be the opposite of Joan Didion’s The Year of Magical Thinking, “Mine would be filled with all sorts of slapstick, demeaning and humiliating things. Like trash cans whose bottoms are falling out…Didion took it on a very high plane, and she does have assistants and maybe a maid. But it’s actually a very hardscrabble experience. It’s not placid and tragic so much as it’s physically arduous.”

Now, really. Was he doing all the work? Did he create no mess? Men on trains will lift your suitcase if you ask them. I know something about doing household tasks without a husband, and if it’s unseemly to brag about cleaning the gutters myself because I was younger 3 years ago, when I last had a house, than Oates is now, my guess is I was also younger than her husband.

After my husband left—for Florida—I suffered more from  sorrow than from the necessity of killing all the mice myself and flirting with the plumber so he’d try harder to figure out why the antifreeze wouldn’t drain out of the system. (Not a job my husband could do, by the way. Either my part, or the plumber’s.)

And just on a word-use note, can you call a life ‘hardscrabble’ if the owner of that life has plenty of money and doesn’t hire help because she’s too shy? I think we need a cat detective to find out what the story is. Why wasn’t the man’s death tragic, at least to his longtime wife? Reader, I’m sorry; she murdered him.

§ 3 Responses to Joyce Carol Oates and the Cat Detective

You are currently reading Joyce Carol Oates and the Cat Detective at Mostly in the Afternoon.