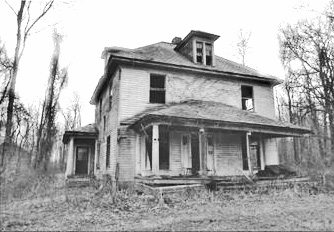 I was reading in the New York Times Magazine about abandoned houses in Cleveland. Not a place I’ve ever wanted to live, even in a mansion, but the article was long and I kept seeing the empty houses—single family, unpretentious, a few bedrooms—seeing them in the hundreds and thousands and thinking: They’re empty. Why can’t people live in them before the pipes are ripped from the walls and the boiler stolen? Wouldn’t that be a good thing?

I don’t know where I’m going to live six months from now. Here in New York or in Florida or both, going back and forth like the child of a particularly odd divorce. I’ve talked about this with both husband and boyfriend; we all have decisions to make, not knowing what the future holds; jealousy and possessiveness are still in play but security looms larger.

Philip has often said plaintively, “Why can’t we all just live together?”

“Because Christine hates me,” I would reply. “And Charles hates you.”

Now Charles has his own girlfriend, whom I will call Cynthia, and he won’t be able to afford me if he loses his job. Yesterday, he said, “I’m starting to agree with Philip. Maybe we should live together.” Meanwhile Philip dreamed that William Shatner was running for Governor, and he wanted to be his campaign manager. I want to be getting a snack in my mother’s beachfront kitchen in New Hampshire in 1974 while she and my teenage brother watch Star Trek reruns on TV.

The Times article mentioned houses being sold on ebay and craigslist for prices like $2,000. Now if it turns out that the house you bought for $2,000 has been stripped of its innards, condemned by the city and comes with a large back-tax bill, your deal is slightly less awesome than what you can find on my ebay site (beautiful jewelry, guaranteed-your-money-back free of mold, mice, vandalism and zombie banks).

But my interest was piqued and I went on line, looking at houses in South Florida. Houses that cost $8,500, or $24,000, or $55,000. Tiny houses and very small houses and smallish houses that resemble road dividers. The tiny and very small ones are often cute, painted fuschia or tangerine, with front porches, bushes, and white trim. Dollhouses. Surely I can buy several, string them together like Christmas lights?

Ten minutes later I was reading an article on Huffingtonpost.com about the amazing deals that can be had now on designer clothes, electronics and so forth. They might as well have been talking about discount plastic dog vomit. I couldn’t imagine buying anything more indulgent than dessert.

Houses like cupcakes, and the rose-tinted old days. That’s what I dream about.

You are currently reading The Empty House Cupcake Dream at Mostly in the Afternoon.