The poodle stands at the bottom of the bed, waiting for me to be more fun.  He looks like topiary. Charles has gone to buy a toilet plunger. While we ate breakfast and my mother and husband talked, trading familiar stories, I watched the garden emerge from darkness: the sage green of dawn and the glow of aging, spread roses. It’s magical to be in nature again, but my feelings are timid and stiff. I don’t want to get too used to it. I don’t want to start dreaming of flowers, garden centers, the smell of dirt in the sun.  Last night we arrived when it was already dark, and after months in New York and hours on an airplane, it was vaguely shocking to be in a house this large, this crammed with stuff. When we dined in the dining room off old china and silver, using napkins that were part of my grandmother’s wedding haul, and my mother talked about population as part of environmental pressure she seemed like a class enemy: one woman in an eight room house when I and most people I know live far more modestly. I can’t remember when it first started seeming odd to me, how she lived. Probably when I sold my own house, which was much more humble and decrepit than this one, but still a luxury: a country house for a Manhattanite, a house with several rooms I could wander through alone, sinking into books and nature, the nature often coming inside for visits. Vines flattening themselves to reach through the gaps around the upstairs windows, making a pretty drapery above the inside sill, snakes exploring the not-quite-finished parts of the downstairs, their looping mud-brown bodies like the exposed electrical cables come to life. It’s only been three years since I sold that house, but life in two rooms has altered my perspective in ways I’m not aware of until I do something like visit my mother. It’s as if the layout of my brain resembles the layout of my living space—and I know this is no mere metaphor, that our brains do change all the time to reflect our surroundings, expand and contract, sprout and wither. It makes me wonder how much the need to create and the nature of what’s created is affected by what’s there and what’s not there, and whether, as I hope, having known intimately many generous houses with character, and now being confined in a small space yet awash in the luxuriant density and detail of Manhattan streets and public spaces, I have all the tools necessary to make vivid imaginary worlds. I’m writing a fantasy now and nothing can be taken for granted, not the animals or the weather or the food people eat: it’s daunting and I love it. I’m just sorry it took me so long—that I had to prove something to myself about being ‘literary’ and, perhaps more profoundly, about having a knowledge of the real world sufficient to convince others that I was indeed one of them, a human being, an insider. This is old childhood stuff: nice to live long enough to shed a bit of it, and to return to the childhood stuff I actually enjoyed…wandering through the glorious world of the back yard, and down the long halls of a house of a kind they used to call a ‘white elephant’—before everyone who could afford it (or not) wanted miles of extra space—spinning tales of my imaginary friends. 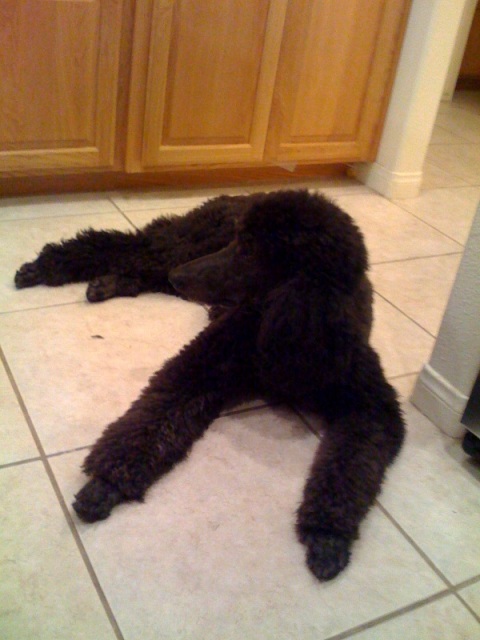 You are currently reading Poodle Christmas at Mostly in the Afternoon.