Do You Believe in Evil? 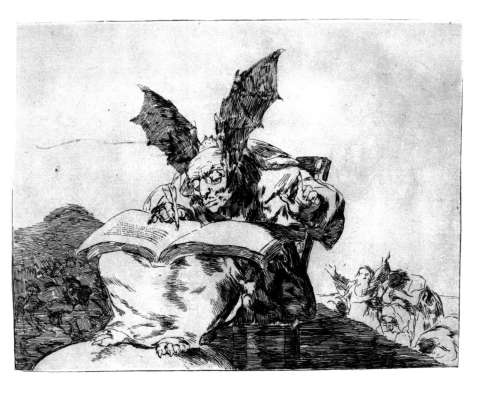 Francisco Goya, The Disasters of War

David Brooks wrote an editorial today deploring what he calls the “rush to therapy” in the case of Nidal Hasan—the fear, by commentators, of inciting anti-Muslim passions and so focusing on the personal aspects of Hasan’s story rather than the ideological ones.

Brooks begins his editorial by talking about the importance of choosing a story to explain life or one’s life, the ferocious need humans have to make sense of the world, and the great power these stories have.

I watched the earliest coverage of the shootings—on Chris Matthews—and this desire not to emphasize the “Muslim connection” was obvious. It did feel like denial, political correctness, etc. And yet, what to do? Brooks writes, “If public commentary wasn’t carefully policed, the assumption seemed to be, then the great mass of unwashed yahoos in Middle America would go off on a racist rampage.”

I don’t know how unwashed they are, or where they reside, but the existence of a great many angry and bigoted people in our country is very real. Hasan’s rage and bitterness led him to take 13 lives. Most of those inflamed by the ideological/religious/ethnic basis of his action will settle for beating a teenager into a coma, or destroying the business of a hardworking older couple.

There’s nothing wrong with TV commentators, who wield so much power over the shaping of stories, being  cautious. What harm is done? Will Hasan be freed with a referral to a psychiatrist?  Will Obama immediately conclude the war in order not to upset potential Hasans?

Or—horrors—will we stop believing in evil? Welcome Satan into our living rooms and tell the kids murder is a lifestyle choice?

None of this is going to happen. Hasan will be in prison the rest of his life. It may be a very short life. The army will pay more attention to the psychic toll of the war, which as Bob Herbert wrote the other day, is affecting thousands of people who will never kill anyone, whose violence will be against themselves and their families, and probably never reach the status of “criminal violence,” though causing no less suffering for that.

The army will not pay enough attention. The loneliness and unhappiness of soldiers who may or may not become a serious danger to others will never be adequately addressed. And my—and others’—sorrow about this, honestly, is not because we think suicide bombers or suicide shooters are lost lambs. It’s not because we care more about not offending people than we do about protecting people.

It’s about what works. It’s about living in a country of people who were born, or whose parents were born, in every nation on earth, people whose religious beliefs cover the spectrum; and at the same time waging and funding wars which inevitably rouse national and religious passions.

It doesn’t matter whether you are for or against our current military policy. For now and the foreseeable future, America will be an aggressive armed presence in the world. Frankly, we have to watch our back, and our back is at home. It made up of people like Hasan and it’s made up of people like the ones who’d like to lynch him—or, if he’s not available, someone with a similar name.

The reason, David Brooks, that we don’t have to go on and on about how evil it is to gun down 13 people at an army base, is that, really, everybody already knows that.

Cruelty has a human heart,
And Jealousy a human face;
Terror the human form divine,
And Secrecy the human dress.

You are currently browsing entries tagged with The New York Times at Mostly in the Afternoon.