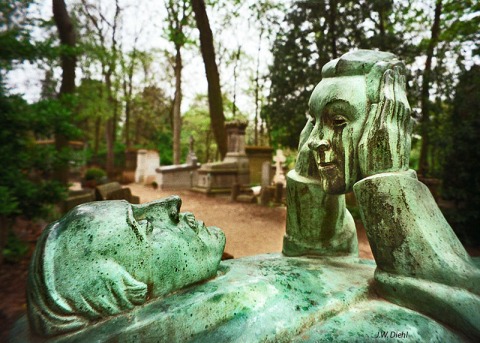 I’m not too keen about weighing in on the deaths of famous men and didn’t think I had anything to say regarding Christopher Hitchens until I read Ross Douthat’s column about him in the Times this Sunday (although what I have to say is not really about Hitchens). Douthat claims the atheist Hitchens as a should-have-been Christian. He ends, “When stripped of Marxist fairy tales and techno-utopian happy talk, rigorous atheism casts a wasting shadow over every human hope and endeavor, and leads ineluctably to the terrible conclusion of Philip Larkin’s poem “Aubade” — that ‘death is no different whined at than withstood.'”

Douthat continues, “Officially, Hitchens’s creed was one with Larkin’s. But everything else about his life suggests that he intuited that his fellow Englishman was completely wrong to give in to despair.”

Yet what makes Larkin a great poet is that he doesn’t give in to despair in his poetry, which is the only part of his life that anyone cares about now. He offers no quotable lines of solace but he follows his arguments to their terrifying end with enormous control and precision of language while the emotions they arouse are so bleak that one can’t help thinking—over and over—so why write? And whatever answer you come up with owes nothing to despair. He didn’t write gaudily about wanting to die, only about struggling to live in an emotional atmosphere very few people could withstand. Yes, he drank a lot, but not enough to kill the poems.

Hitchens was altogether a happier and more charming creature, and if he had, as an atheist, more interest in God than many atheists do, it was surely a result of the fact that God and his various cohorts are everywhere in literature. If you love the masterpieces of the English language—not to mention all the other Indo-European languages—you’ll have Christ, Yahweh, Satan, et al, rattling around in your brain, along with the Greek and Roman Pantheons, other deities, half-deities, and assorted supernatural specimens. And if you’re Hitchens, you won’t know too many people as conversant with them as you are. So, yes, you’d want to talk to religious intellectuals. And you might wish God himself were around to debate.

One way of looking at the human spirit is to say that those who withstand horrific tragedies and remain or become productive, generous, joyful contributors to the world have the most to teach us. But it’s also true that there’s something to be learned from people like Larkin—people without the solace of belief, suffering severe, unending melancholy, but determined to explore and communicate that which they do know, to honor the peculiar shape of their experience without drowning in it.

And I’ll be damned if I know why I’m strewing these blessings around, since like Christopher I suspect that all joy and pleasure is here, along with every variety of torment. Merry Christmas.

Continuing to live – that is, repeat
A habit formed to get necessaries –
Is nearly always losing, or going without.
It varies.

This loss of interest, hair, and enterprise –
Ah, if the game were poker, yes,
You might discard them, draw a full house!
But it’s chess.

And once you have walked the length of your mind, what
You command is clear as a lading-list.
Anything else must not, for you, be thought
To exist.

And what’s the profit? Only that, in time,
We half-identify the blind impress
All our behavings bear, may trace it home.
But to confess,

On that green evening when our death begins,
Just what it was, is hardly satisfying,
Since it applied only to one man once,
And that one dying.

You are currently browsing entries tagged with philip larkin at Mostly in the Afternoon.