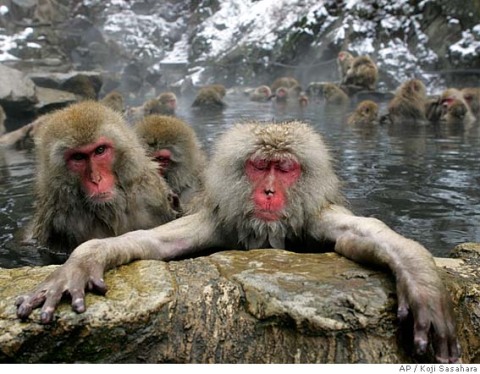 For months and months, when I’d look at the search terms people used to find my blog (ever curious am I), I’d see the same words, which I will not repeat, pertaining to individuals of my gender undergoing corporeal distress. I’d had things to say on that subject, true, but couldn’t I attract a less bloody-minded crowd?
But for the last few days the premier search terms were “sloth” and “monkey.” That’s more like it. Sloth is my besetting sin, though the others all take their toll, and there’s a pronounced strain of monkey in my lineage. My mother says: Welsh, Native American, Jewish (she has no proof for the Jewish; she just feels Jewish, without, let it be said, desiring to abide by any religious rules, or coveting Jewish angst), and probably African—her family settled in the south in the 17th century; on my father’s side, German, Irish, English.

All that’s fine, but the monkey’s in there too. It’s been in there forever but in some generations it’s more noticeable than others. My brother spent a great deal of his childhood in the bushes (imaginatively, my father nicknamed him “Bushes”), and took his clothes off in public until he was 35. My sister had a passion, in her younger days, for popping the zits on my husband’s back, something I did also, but only a monkey would extend those grooming habits to an in-law. She has a wild, gleeful side, jittering with energy and the kind of jokes you understand without recourse to your brain; this is perhaps a sign of mania, but also reminds me of a monkey amusing herself in Bloomingdales after hours.

As for me, I have much in common with chimpanzees who learn to talk—mostly mute in public, communicating by means of signs and computer manipulation. I don’t throw my feces at unwanted visitors, but I understand the impulse. And I’d be very happy to spend the summer in trees, swinging from branches, if someone would kindly return my 10-year-old body. As for my husband, who’s kin of a different sort, I think it’s enough to say that he still misses a pair of sock monkeys we once owned, a quarrelsome pair named Jimbo and Miss Monkey, whom we had to discard after the mice nested in their guts. At least the cats won’t suffer that ignominious end.

A little change of pace (but at least it has an ape in it…and reflects one part of the mind, not the one that jokes)

Night Without Sleep
BY ROBINSON JEFFERS
The world’s as the world is; the nations rearm and prepare to change; the age of tyrants returns;
The greatest civilization that has ever existed builds itself higher towers on breaking foundations.
Recurrent episodes; they were determined when the ape’s children first ran in packs, chipped flint to an edge.

I lie and hear dark rain beat the roof, and the blind wind.

In the morning
perhaps I shall find strength again
To value the immense beauty of this time of the world, the flowers of decay their pitiful loveliness, the fever-dream
Tapestries that back the drama and are called the future. This ebb of vitality feels the ignoble and cruel
Incidents, not the vast abstract order.

I lie and hear dark rain beat the roof, and the night-blind wind.

In the Ventana country darkness and rain and the roar of waters fill the deep mountain-throats.
The creekside shelf of sand where we lay last August under a slip of stars
And firelight played on the leaning gorge-walls, is drowned and lost. The deer of the country huddle on a ridge
In a close herd under madrone-trees; they tremble when a rock-slide goes down, they open great darkness-
Drinking eyes and press closer.

Cataracts of rock
Rain down the mountain from cliff to cliff and torment the stream-bed. The stream deals with them. The laurels are wounded,
Redwoods go down with their earth and lie thwart the gorge. I hear the torrent boulders battering each other,
I feel the flesh of the mountain move on its bones in the wet darkness.

You are currently browsing entries tagged with monkey at Mostly in the Afternoon.