Here I am Again 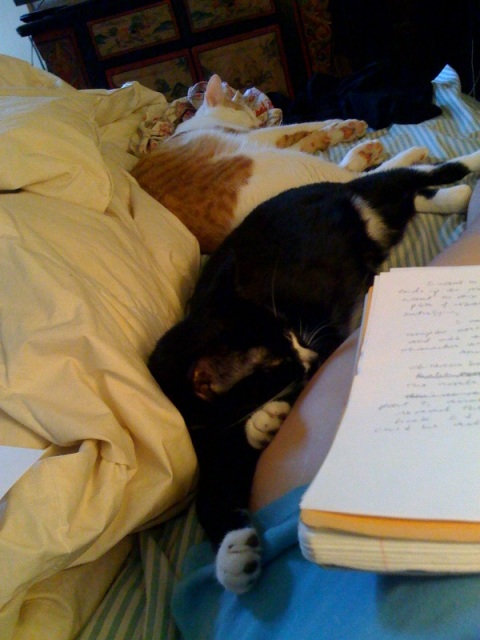 There have been complaints that I haven’t been keeping up my blog. I thought maybe if I stopped pouring my heart out here, I’d get more work done. This has proved not to be the case. A general sluggishness prevails in my household, possibly a cat virus. Or maybe it’s the no sex, so sugar thing I’ve got going on…

It’s been five minutes; can I go yet? How about if I take a break for a cup of tea? Or spend an hour on the Internet looking at fares to recession-battered Europe, or figuring mortgage rates on decaying mansions near a certain oil slick that will probably be cleaned up before I die?

Local news: I passed a young woman on the street, talking on her cell. She said, “I’ve only been able to see, like, 2.5 people since I’ve been in New York. I was planning to see, like, 5.5.”

And in the NY Times today, “When two children discover a special bond between them, we honor that bond, provided that neither child overtly or covertly excludes or rejects others,” said Jan Mooney, a psychologist at the Town School, a nursery through eighth grade private school on the Upper East Side of Manhattan. “However, the bottom line is that if we find a best friend pairing to be destructive to either child, or to others in the classroom, we will not hesitate to separate children and to work with the children and their parents to ensure healthier relationships in the future.”

Destructive to others in the classroom? Like, two kids who get together to buy trench coats and plan a school shooting? I don’t think that’s what she means. I actually went to Town School. I didn’t have a best friend, but other kids did. I don’t remember being destroyed by it. In fact, and you may find this hard to believe in a 7th grader, but even in my post-traumatic isolation (family deaths) I found others’ friendships heartwarming. And when I had a best friend again, in 9th grade, we excluded others heartlessly and it was essential to our bond, you and me against the world, etc. The smell of dog pee on a rug still brings back the memory of those afterschool afternoons in her room, the flow of talk that never stopped though we didn’t actually have anything to say. I wouldn’t have missed it for anything.

That woman quoted above? May she lose her job and have to go work in a robot nursery. May all her friends call up and say, “Guess what? I’m not allowed to be friends with you anymore. Bye.” I’m glad I don’t have to deal with people like her because if someone said that to me about my kid I think I might bite her fingers off.

Two young men—you just might call them boys—
waiting for the Woodward streetcar to get
them downtown. Yes, they’re tired, they’re also
dirty, and happy. Happy because they’ve
finished a short work week and if they’re not rich
they’re as close to rich as they’ll ever be
in this town. Are they truly brothers?
You could ask the husky one, the one
in the black jacket he fills to bursting;
he seems friendly enough, snapping
his fingers while he shakes his ass and sings
“Sweet Lorraine,” or if you’re put off
by his mocking tone ask the one leaning
against the locked door of Ruby’s Rib Shack,
the one whose eyelids flutter in time
with nothing. Tell him it’s crucial to know
if in truth this is brotherly love. He won’t
get angry, he’s too tired for anger,
too relieved to be here, he won’t even laugh
though he’ll find you silly. It’s Thursday,
maybe a holy day somewhere else, maybe
the Sabbath, but these two, neither devout
nor cynical, have no idea how to worship
except by doing what they’re doing,
singing a song about a woman they love
merely for her name, breathing in and out
the used and soiled air they wouldn’t know
how to live without, and by filling
the twin bodies they’ve disguised as filth.

You are currently browsing entries tagged with friends at Mostly in the Afternoon.