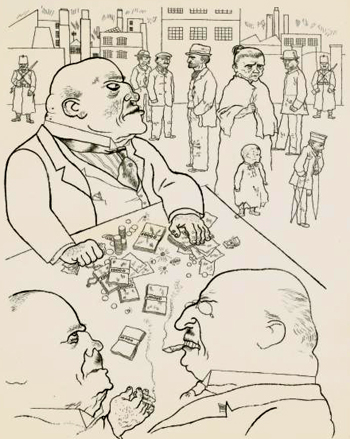 Europeans are considering castrating sex offenders, while we can’t even manage to get the drop on the Wall Street economy-assassins.

Bernie Madoff in jail will make a lot of people feel better. But that was an easy case. He broke laws flagrantly, admitted guilt, and his victims are specific and powerful. What about the rest of them, the ones who may or may not have broken laws but nonetheless have impoverished millions of people?

Jim Cramer’s excuse on Jon Stewart last night was the CEOs he trusted, “guys I went to school with, friends,” lied to him. Stewart was scornful of this; journalists should expect to be lied to. Cramer isn’t the real villain here, though he’s a jackass. The powers-that-be at CNBC decide when and how to deploy their real financial journalists.

But what now? Americans want bonuses returned, regulation put in place, credit restored. They also want those who lied criminally to be punished, and for the rest to admit it was greed and stupidity as far above and beyond the greed and stupidity of the average person as those bonuses were above the windfall of 50 grand of new equity in your house that maybe you spent unwisely.

I understand that it all made sense if you were part of the club where everyone else was insane too. Really, I do get that, having hung out with alcoholics. But once the game is over, you’ve dried out and seen the damage, once the whole world is listening in on those private drunken conversations about your mutual brilliance…to not see what went wrong takes enormous mental effort, the kind that deforms and constricts all cognitive functioning.

Are they laughing up their sleeves? The ones who got out in time are. Many of the rest are painfully riding it out, hating their attackers. And some have brains are dribbling out their ears from the continual strain of lying to themselves. Those are the ones we need sobered out of the complex intoxication of wealth, status and risk and put to work in our universities and MBA programs, explaining to the young how it happened, what the dangers, temptations and ignored warning signs were. Nobody understands it better. Like ex gang members, they have street cred.

We don’t need their experience to run our banks. What part of it was valuable they trashed themselves. We need to tap into the fascination people feel for those who fall far, especially into the willful stupidity that intelligent kids find so hard to fathom—childhood and adolescence being places where you need your wits about you.

As for those caught in criminal lies…while they’re awaiting trial, lock them in cells with continuous video of those European doctors gelding sex offenders.

You are currently browsing entries tagged with bankers at Mostly in the Afternoon.