In for a Penny 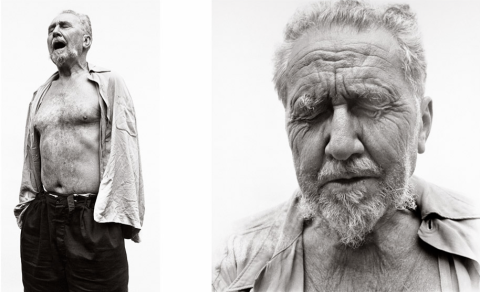 After working all morning yesterday, I spent the early afternoon eating vanilla toffee energy bars while listening to the thunderstorm and saying silly things to the cats that made me feel like the dear, dotty, occasionally murderous old ladies so prevalent in British fiction. Then I did a more leisurely kind of work, reading poets’ letters in preparation for a Cathedral American Poets Corner show celebrating the USPS issuance of “10 Great 20th Century American Poets” stamps (7 of the poets in the Poets Corner made their cut).

This mostly consisted of the irritating practice of poking around in Google books, using various search words (poem, woman, love, want, bastards, money, never) to get pieces of letters such as this one from William Carlos Williams to Ezra Pound, after Pound wrote to him saying that T. S. Eliot was moving back to the States, teaching at Harvard, and since he’d likely feel lonely, would Williams kindly write him a note of welcome?

Pussonally Eliot can go to hell before I welcome him to these shores. But since your letter is so damned decent, not to say generous, I’ll ignore the proff rather than tell him what I think of him. If I must get culchah I’ll take it from someone else. For I’m sure he will pizen a generation from his mere sickly presence—even in New England. Apparently he is sick from what you say. That would enlist my interest as a physician– if he weren’t a writer as well. No. To hell with him. Harvard without him is bad enough.

But I won’t kick him in the stomach. I suppose there’d be no use trying kicking him lower.

Jesus Christ, you’ve got a nerve asking me to do a thing like that, now that I think of it. I think you’ve been abroad long enough. I’d suggest that you come over here as Eliot’s valet.”

The letter goes on, I believe, but without buying the book I can’t say how.

Pound had a habit of writing in a rich multi-lingual but mostly early 1900’s American slang, which Williams always tried to meet up to, but never quite could. I’d give you a sample of Pound—he’s quite delicious—but don’t feel like copying it out. Maybe another time. Reading all these letters for this project is going to be one of the best parts of the summer.

June 25th and 26th are important anniversaries, so I did a little remembering. Rain, cake, wine, sex, somebody falling off a banquette, somebody getting too drunk (that could be me), somebody playing guitar too long, somebody asking me if I wanted to have babies with her husband, somebody leaving (repeat). Kind of want to shoot myself in the head, kind of want to go back to the wet grass, ocean view, dog & children…

You know how they say (some say) that the past, present and future are all part of a great many-dimensional matrix, that if you happen to be the sort of being with those powers—or a writer, pretending to be— you can slip your finger or tilt an eye wherever you want in the time stream? Well, this is undoubtedly another one of those pretty lies, but it gets easier to think you can do it the older you get. Once the future is eliminated as a source of worry and desire, the whole everything-happens-at-once thing starts seeming almost natural.

I wonder if I would feel this way if I had any ability at all to bear being in the moment. It’s not that I don’t know how. It’s not that it’s frightening, exactly. It’s just so goddamned big. And you have to either be alone there or slip through other people’s skins, which, again, I kind of know how to do, but that really is frightening…

Poets’ letters can have strange effects. Just warning you.

In this poem, David Lehman parodies Ezra Pound’s rants in the Cantos

If Ezra Pound were alive today
(and he is)
he’d be teaching
at a small college in the Pacific Northwest
and attending the annual convention
of writing instructors in St. Louis
and railing against tenure,
saying tenure
is a ladder whose rungs slip out
from under the scholar as he climbs
upwards to empty heaven
by the angels abandoned
for tenure killeth the spirit
(with tenure no man becomes master)
Texts are unwritten with tenure,
under the microscope, sous rature
it turneth the scholar into a drone
decayeth the pipe in his jacket’s breast pocket.
Hamlet was not written with tenure,
nor were written Schubert’s lieder
nor Manet’s Olympia painted with tenure.
No man of genius rises by tenure
Nor woman (I see you smile).
Picasso came not by tenure
nor Charlie Parker;
Came not by tenure Wallace Stevens
Not by tenure Marcel Proust
Nor Turner by tenure
With tenure hath only the mediocre
a sinecure unto death. Unto death, I say!
WITH TENURE
Nature is constipated the sap doesn’t flow
With tenure the classroom is empty
et in academia ego
the ketchup is stuck inside the bottle
the letter goes unanswered the bell doesn’t ring.

You are currently viewing the archives for June, 2012 at Mostly in the Afternoon.