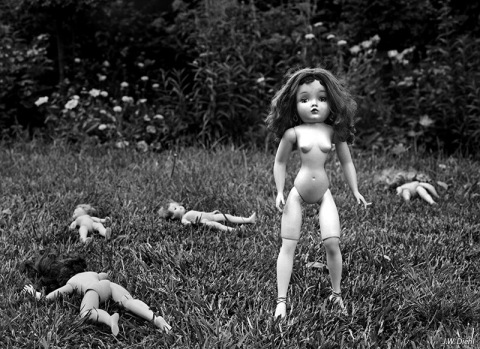 Tonight I heard four poets read at the Cornelia Street café, at the invitation of my darling friend Janet Kaplan, who was as comfortable on the stage as a platinum sea goddess on a scallop shell, and a much better poet than any lazy-ass divinity. Her poems were funny and crazy,in the best sense. Full of sparklers. She read with Kate Greenstreet, whom I have heard before but this time Kate was better, reading with a sly wit and rasp that crept into the poems and hung around the ends of lines after she moved on. Also two poets new to me, Brian Clements and Beth Frost, were smart and fun to listen to.

Walking home in the spring evening, I had poems and stories in my head: specifically novels I could turn into stories because I don’t want to stay with anything too long. I have the bones of the tales. I never did before. I had words and images, later, characters and situations. Now it’s stories, stories, stories. So many ideas, so little follow through.

And why is that? There’s something terribly painful in my personal life which I would talk about except that a) there’s a limit to candor, and b) I think I’d sink into the abyss and never come out. Instead imagine a party of mad poetry and leanly-muscled stories getting euphoric in my head while lurking around is The Terribly Painful Personal Thing, an old man in a raincoat with skinny bare legs and black shoes. It keeps me awake nights. It makes me do Internet searches for unspeakable activities. When you do that you realize there are two kinds of people on those forums, the ones who say, “What kind of jerk are you to look for something like this on a public site?” and the second kind, who are crime writers.

No, there are also people like me who will never do the unspeakable thing, who may well write about it, but probably won’t. I could write a different crime novel. I have one in mind. It’s a comic novel. I need more of my self back to write it, or write anything (which is why I am here, reblogging—a disgusting term that sounds like mouse vomit).

I’ve been thinking a lot about mice lately. Maybe because I’ve killed so many. Or because I feel so tender when my cats carry the corpses around like Christmas presents, then drop and kick the dead thing hopefully for more fun. Or maybe because as someone once said, I’m mousy.

I blog because people read it and that kind of feels like work or like love or simply being alive. I have no idea who reads it other than my husband’s girlfriend, my lover’s girlfriend, and my cat’s girlfriend. (I made up one of those.) I write it not for my mother and siblings to worry. I write it for strangers, but sadly, the strangers so rarely write back.

Let me cheer you up with one of Janet Kaplan’s poems, from her new book, Dreamlife of a Philanthropist. This poem should be a perfect rectangle; if it’s not, it’s the font’s fault. Also, the title is below the poem. My favorite sentence is the third from the bottom. You can always be sure I’ll go for the animal stuff, though baths are good too, and loneliness (if it’s clean).

I’m being rinsed in a future bath. The future, which
softens, no matter how the water runs. My childhood
miracles, spun with utter conviction and a straight
face. Grandmother mixes seven parts water, three parts
soap, one part tallow. Grandmother washes her lone-
liness in the world’s. “Sometimes it’s real, sometimes
it isn’t,” Auntie warns. She pours tinctures from her
alabaster jars. Here in El Norte we’ve remnants of in-
sect legs, neighbor with the tail of a pig. But nowa-
days no one wants to accommodate such things. Why
should we, when the drying process allows for ease
of absorption and a fresh, clean scent?

ONE HUNDRED YEARS
OF FABRIC SOFTENER

You are currently viewing the archives for May, 2011 at Mostly in the Afternoon.