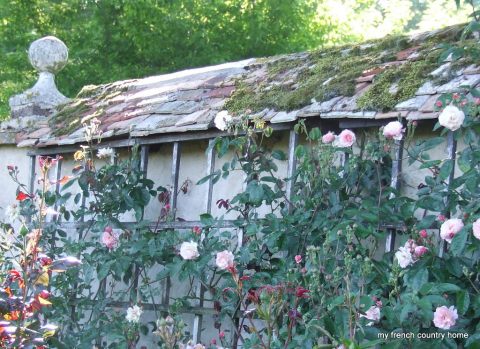 This weekend: a walk in the Brooklyn Botanic Gardens, an Eric Rohmer film at Lincoln Center (Le Beau Mariage, with the incomparable Arielle Dombasie) champagne with Lisa. I remembered how brilliant Rohmer is, but not that exquisite pleasure one feels at the end of one of his films, as the whole comes together, not like a short story—which is the most obvious comparison—but like a painting. The cinematography is masterly but that’s not what I mean: all the elements of the film combine in the dance of connections you see in a Vermeer or Brueghel: something so specific and so typical the tension between the two becomes joy. I can’t think of a short story that does this. Finding the universal in the specific is not at all the same thing. Rohmer’s movies, like most French movies, are full of dialogue and it’s realistic dialogue yet it still reminds me more of daubs of color than words.

Mlle Cecile Brunner, 1881, is the unassuming, pink climbing rose you expect to see in the in the front yard of storybook English cottages, although I suppose it was cultivated in France. It’s the kind of rose that makes me think of hot green grass, limpid skies, an afternoon slice of white moon hanging shyly over the shrubbery. It smelled good too, just like a rose. I’ve been thinking a lot about France. My friend Andree, who’s living there now, described it so beautifully: the Seine, the calm, the light, the townspeople coming out to hear her and her husband play music in the local restaurant. And then, of course, Eric Rohmer, who makes me want to move there yesterday. For the first time ( and this is due not only to the charms of France, of course), I thought: I wish I’d been born in Europe, how relaxing not to be an American…

There was another rose in the Botanic Garden whose name I wish I’d noted, the red of the perfect lipstick, the one you only find once or twice in your life, a velvety deep red that loses no color to darkness (and disappears from cosmetic lines swiftly, as if the shade itself is in short supply). That’s the one I keep thinking about, so I guess I’ll have to go back next year. And when I find a lipstick that femme fatale red, I’ll pack up the cats and husband and go to France, where being a writer, a woman in her sixth decade, a rationalist-sensualist non-monogamous devotee of thorns and roses is to fit in quite easily. If only I hadn’t forgotten so much of the language…

Never mind! It’s Sunday night, I have a lot of work next week, the apartment is clean, and the Rohmer festival continues.

Down By the Salley Gardens

In a field by the river
my love and I did stand,
And on my leaning shoulder
she laid her snow-white hand.
She bid me take life easy,
as the grass grows on the weirs;
But I was young and foolish,
and now am full of tears.

You are currently viewing the archives for August, 2010 at Mostly in the Afternoon.