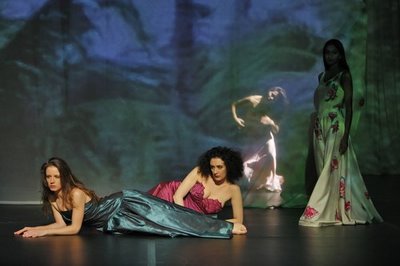 from Bamboo Blues, by Pina Bausch

I just read that Pina Bausch, the great German choreographer, just died of cancer. I am very sad, selfishly so. I love her work and didn’t seen enough of it: enough meaning all. I saw several pieces maybe 12-15 years ago, and then this fall went to Bamboo Blues with my niece Ramona, who loves and practices dance.

I won’t try to write a critique because I don’t feel fluid in dance vocabulary but, briefly, her pieces were wonderfully funny and haunting, dreamlike, with lots of characters in enigmatic interactions (flirting, vamping, raping, dying; most interesting  to me, bodies as found objects for other bodies to play with). The ‘dance’ movements were interspersed with little dramatic bits like Cornell boxes (and not at all like them, but tiny and contained and surprising). She was famous for her sets: the stage covered with earth, leaves, flowers, still pools or cascading water. She was nothing if not lush, and I found her work consistently gorgeous. That it was also deeply intelligent only proves to me that abundance is always the smartest story. (I know this is a point that needs development. Later.)

If you know nothing of Bausch’swork, look on youtube. I don’t know what’s there, but certainly something is.

It’s strange how all this week I’ve felt so aloof from the frenzy over Michael Jackson and Farrah Fawcett, feeling no more for them in death than I did in life. I am who I am, too late to change that, but I’m not smug anymore about being divorced from mass culture. I don’t want to join in or I would, but there’s a certain loneliness.

So, feeling that, trying to put it aside and get on with the pleasure/pain of work, I read about Pina Bausch. Nothing more coming out of that exquisite brain, ever.  I would have liked to know who she was at 85 and 90.

Just before I saw the headline, I was adding up all the books I might be able to write in my lifetime, if I live an average span, and remembered how the arc of writers’ careers used to fascinate and terrify me. The great were always great young. Some writers emerged in middle or old age, but only briefly, as if the shock of recognition was too much to handle. As if they didn’t have the muscle.

Yeah. Cool. I better get on with it.

You are currently viewing the archives for June, 2009 at Mostly in the Afternoon.