“She ordered a cup of tea, which proved excessively bad, and this gave her a sense that she was suffering in a romantic cause.”~Henry James, Washington Square

I went to Washington Square Park yesterday, to witness its grand re-opening. It was a perfect spring day: warm and cool, blue and sunny, with a little breeze. There were lots of people in the park at 6 p.m. Mothers with strollers and young men with guitars, tourists and NYU summer-school students and neighborhood folk. Everyone seemed to agree that the park looked beautiful, though a few old-Village types smiled ironically and wouldn’t stop for comment. It wasn’t the kind of day or crowd where you even wanted to say, It sucks.

Little children played in the fountain. People took pictures. They sat on the benches and on the grass, and though this is New York and people mingled with strangers only at the kid magnets and in front of the performers, there was a general mood of goodwill. Nobody was screaming about a wasted 27 million.

Most of the park was closed for two years for renovation, the most controversial part of which was realigning the stone fountain so it was centered with the arch (erected out of wood and plaster when Washington was elected President; in the 19th century redone in marble as a copy of the Arc de Triomphe). The renovation designer is George Vellonakis, who, according to The New York Times, envisioned “viewing corridors” and “great, clean lines.”

Lots of us thought the park and the fountain was fine the way it was. Off-center: so what? I’d never noticed and when it was pointed out to me, I realized it was part of the charm, tacit notice that you were not in Rockefeller Center or on the Champs-Elysees. Just in case you forgot. You were in Greenwich Village, which has its own history, much of which involves the off-center. The park was originally a cemetery for the indigent and victims of yellow fever, and then a military parade ground. More recently, artists and writers created the culture of the 20th century in the surrounding streets, while destroying marriages, neglecting their kids, driving their friends to distraction and dying of drink.

How often have you stumbled home profoundly intoxicated by one substance or another and been unable to make the world line up as it should? It doesn’t matter whether your answer is never, all the time, or only in my lost, glorious youth. The old fountain embodied it for you. It said: here be geniuses and crackpots. Check your compass. Hold onto your date and your wallet.

The park has gentrified almost beyond recognition since I first saw it in the late 1960’s. For years it’s been green and lush, full of flowers, carefully planned and tended to. When I used to prowl it at 14, smoking joints or drinking Mateus under a tree with my cousin Faxy, the grass was dingy and matted with dogshit, there was lots of trash, and I don’t remember any flowers. Of course it was always night when we went there, so I might not have noticed flowers.

My park was mutilated in 1970 when the grass was ripped out for a cement “playground” with humps in it like what you’d expect if a few visiting camels fell into the mixer. The humps were supposed to inspire childish play: they were good for skateboarding, which I had outgrown. I preferred dim greenery where I could swig cheap wine and wait for my prince to come.

Park planners were surprised that the humps were taken over by minority kids practicing difficult moves on jazzed up boards. I guess they’d  expected Caucasian 8-year-olds to run up and down playing tag, exercising their chubby little legs.

I left the Village for a couple of decades, moving back in time for the crack years. My stepson could tell you more about that; he spent the summer of ’86 hanging in the park every night, selling my antique silver jewelry for drugs. Crack? I have no idea.

In those days you never walked through the park unless you wanted to be hounded by guys muttering, “smoke, smoke, smoke,” all the way. I sent my husband out to buy me pot one night (after my stepson had absconded for Florida). The cops nabbed him and wanted him to finger the dealer, of whom there were several in the vicinity, youngish black guys in sweats and sneakers. He didn’t want to do that, so, thinking fast, said, “I don’t know. All those guys look alike.” The cops let him go in disgust.

In the 90’s, the dealers were thinned out when locally-hated monster NYU stepped up its gorging on neighborhood real estate. (One of the more deeply held conspiracy theories is that NYU paid under the table for the current renovation in exchange for unspecified park-eating privileges.)

Yes, the park is beautiful and later I’ll go check it out in the less crowded daytime, but I miss the way it was last year. I miss the way it was when I was 14. A little squalor never hurt anybody. Well, yeah, it did, but life does that anyway. I never felt in serious danger there. The dodgiest thing that happened to us was when a charming young man who called himself J.C. talked us into panhandling to help support his pregnant wife and pregnant girlfriend. We did it for an hour or so, made him a few bucks. I don’t know about my cousin, but I was hoping for a kiss. (No more than that. I was 14, and not totally stupid.)

Guys didn’t talk to us often. We were too young and we didn’t wear make up, jewelry, girl shoes or sexy tops. Our posture was defensive and we never smiled if we could smirk.

The evening would end with the 10-cent Italian ices from the guy on 6th Avenue whom I can’t think of away from his cart anymore than I can think of Sancho Panza off a donkey. The ice came in little white paper cups, perfectly packed and mounded. And like every sentimentalist from the beginning of time, I’ll say it: no artisanal goat cheese and fennel gelato can beat those raspberry ices.

Still, I’m happy to have my park back. 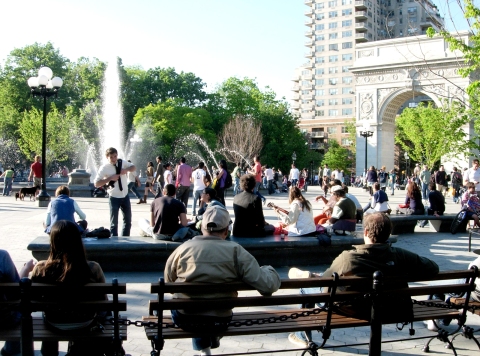 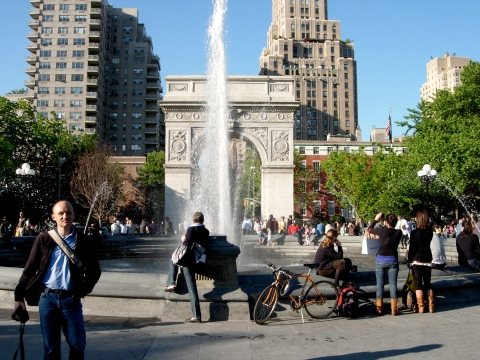 You are currently reading Washington Square at Mostly in the Afternoon.