Fish Chowder and The Afterlife 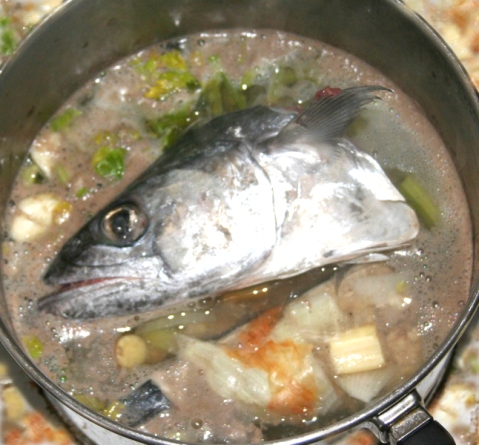 The Kingfish gave of itself willingly.

I was going to make a pumpkin-rootabaga-parsnip soup today, with roasted chestnuts on top, but Charles snuck away to the docks, bought a kingfish and proceeded to make chowder. He made stock from the head, vegetables and cilantro (simmered for 45 minutes) then added celery, rootabaga, onion, garlic, cuisinart-pureed raw eggplant and a little cream and “cooked it until it was done.” Grilled fish and red peppers were added at the table. It was the best fish chowder I’ve ever had. The cilantro and eggplant gave it a hint of my favorite Thai green curry, but not enough to distract from the freshly-caught fish.

I’ve been working on my ebay site all morning, though the beach beckons. Describing my necklaces makes me want to create more—or more honestly, makes me want to pile up all the stones and run my hands through them. When I die I want to be buried with beads; not the finished jewelry and not the glass beads, but all the jaspers and agates, and lapis to bribe the devil. William Burroughs was buried with his gun. For a man who shot and killed his wife by accident in a stupid William Tell game, that takes some nerve, the kind associated with disturbed 14 year old boys and male writers of the Beat generation. But I guess he thought he might need that pistol where he was going. Might need to shoot his wife again.

I always thought the idea of a coin to pay the ferryman was odd. If a spirit-being condemned to row the newly dead across a misty river endlessly wanted anything from earth, you’d think it would be a case of whisky—or a goatskin full of fermented mare’s milk, as the case may be. As a child, I was also confused by the ancient custom of putting food in the grave with the corpse. I thought: it’s stupid to think the dead need to eat, but assuming they do need to eat, won’t they get hungry again when they finish the little bit you sent with them? I hadn’t yet gotten used to the idea of being weaned from a familiar, relied-upon substance: coffee, carbs, Prozac. I suppose the dead might appreciate those kernels of corn and wizened apples to help get them through their withdrawal from life. In this light, purgatory is no different than what heroin addicts go through in prison. You’d need it, I think. If an afterlife exists, which I find very hard to believe in but the rumors persist, surely the transition would give you the bends. A hospital room, then…flatline…Heaven? Back up. I’d need a compulsory orientation (folding chairs, bad video), the longer and more boring the better. I’d want to squirm beside my fellow recently-departeds—sorry, arrivals—checking out their reactions, looking for potential friends. And if I died when I wasn’t feeling too bad I’d need a few roundhouse punches to get me over my addiction to the earth. I’d want that smashing-down-to-nothing addicts go through so that simple health becomes a flaming miracle. Even if Heaven is in fact heavenly, I imagine I’d miss the wind in the trees and animals and hot tea. Brew me something foul from a dog’s liver and whack me with a branch a dozen times, I’ll change my mind. I’ll take Heaven.

As for Hell: if I end up there, I can always look for Daddy.

You are currently viewing the archives for November, 2008 at Mostly in the Afternoon.